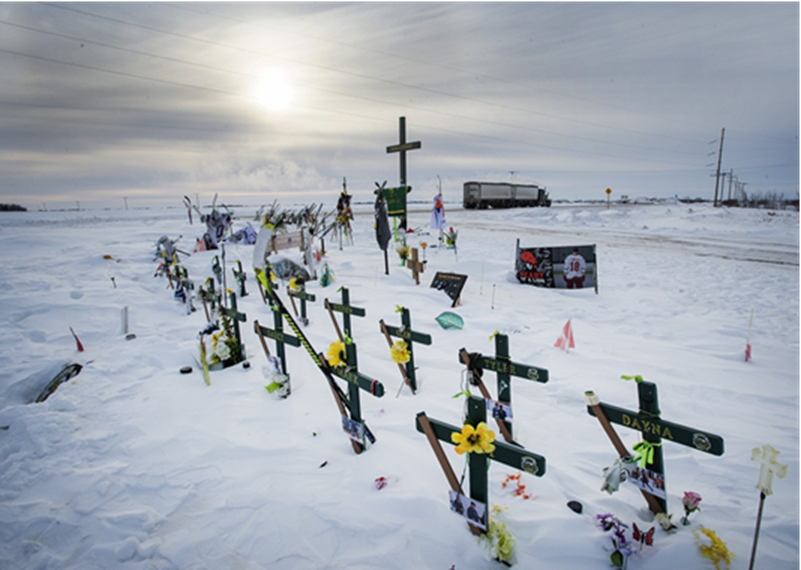 THIS SHOULD NEVER HAVE HAPPENED

RHE LLP has assumed conduct of the class action proceeding arising out of the tragic Humboldt Broncos bus crash which occurred near Armley, Saskatchewan on April 6, 2018. Sixteen people were killed and thirteen others severely injured when the northbound bus on Highway 35 carrying the Humboldt Broncos hockey team collided with a loaded semi-trailer travelling westbound on Highway 335. The hockey team bus entered the “Armley Corner” intersection with the right of way when it struck the semi-trailer which failed to observe a flashing stop sign. The Defendant truck driver Jaskirat Singh Sidhu plead guilty to 16 counts of dangerous driving causing death and 13 counts of dangerous driving causing bodily harm.

The SK Certification Hearing in this matter is schedule for April 28, 2022, for 10 days.

The AB Certification Hearing in this matter is schedule for September 18, 2023, for 5 days.

Why a Class Action?

In an outpouring of sympathy, care and concern from across Canada and around the world, significant monies were raised to help victims and survivors through Go Fund Me. This exceptional effort at charitable giving will not however address the serious legal and regulatory wrongs that contributed to the Humboldt Broncos Bus crash.  The primary purposes of the class action are accountability for the alleged wrongdoers and prevention of future catastrophic motor vehicle collisions like this on Canadian highways.

Unlike criminal proceedings, which address and punish criminal conduct, the only legal remedy for victims against careless companies or government authorities who contributed to the Humboldt Broncos Bus crash is civil litigation.  A class action is the most efficient and cost effective way to allow victims to seek justice against these common Defendants based on the harms they are alleged to have caused. Class actions prevent multiple, duplicative or inconsistent claims and potential judgments from arising through a single, umbrella proceeding.

A Class action lawsuit such as this is designed to change how companies operate, improve trucking industry safety standards, impact how governments regulate highways and intersections, and impact how governments supervise and regulate safety features on buses, licensing and education of truck drivers and the regulation of the commercial trucking industry.

Who can be a Class Member?

The representative class plaintiffs are Carol and Lyle Brons whose then 24 year old daughter Dayna Brons was killed in the crash.  Dayna was the Broncos’ athletic therapist.

Broadly speaking there are three contemplated classes of claimants: (a) family members (including billeted families) of those killed; (b) injured crash survivors; and (c) traumatized first citizens and first responders to the horrific crash scene, as well as medical personnel and other individuals involved in detailed aspects of the collision and crash scene. If you are a potential class member, please fill out the form below to get in touch with us. Joining our contact list creates no financial obligation and we will keep all the information that you provide to us confidential.

As class members, victims may be entitled to compensation pursuant to a confidential application process after the class has been certified and a court approved class settlement has been attained. No victims are obliged to participate in the claim if they do not wish to do so.  Further, and often in class claims arising out of tragedies such as these, class members opt to donate any compensation to charities of their choice.

Who is being sued?

All the Defendant companies are expected to have liability insurance to answer any negligence claims.

The driver of the Broncos bus Glen Doerksen (59) who was likewise killed in the crash is not  named as a Defendant.

The class action alleges that the bus crash was preventable, foreseeable and that all of the named Defendants breached various legal responsibilities they owed to the victims and their families, including (but not limited to) as follows:

None of the allegations have been proven in court.

Note: You are not obliged to fill in this form to participate in this class action. If you choose to do so, you are not retaining RHE LLP to act on your behalf. Providing the information requested does not make you a client of RHE LLP. All information submitted will be treated as confidential and will only be released as required by law or as you may consent.

I provide my consent and agree herein to receive communications from RHE LLP, which may include announcements regarding class actions, practice updates, newsletters, publications, event invitations or other information that may be of interest. I understand that consent to receive these electronic communications may be withdrawn at any time by emailing reception@rhelaw.com